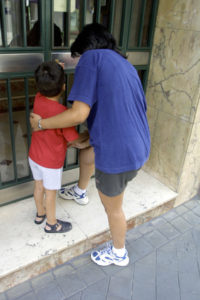 Years ago, before I had ever heard the word “attunement” associated with adoptive parenting, a therapist told me, “Your son is telling you what he can handle by his behavior.”

More than anything else, those words have impacted our family for the better. I have learned to understand each of our children as individuals, regardless of whether they can communicate their needs verbally. With one of our sons, this principle has given us an opportunity to build a foundation so he could begin to trust us. As I reflect on our experience, I realize he consistently communicates what he can handle in the following three areas:

How Close I Can Be to Him?

For the first year he was home, I had no idea our son’s behavior was unintentional communication. In fact, I thought he was being manipulative. In my presence, he was tense, controlling, seemingly disrespectful, and had many disturbing behaviors.

With other adults, he seemed charming. He wasn’t happy or free, but he seemed superficially pleasant. While he wasn’t thriving, he seemed to have an easier time surviving apart from me.

And it was true. As Mom, I was the most threatening person in his life. In my presence, he was more stressed than he was in any other setting or with any other person. In order to accept nurture from me, he needed space from me. He needed me to be attuned specifically to how close I should be to him at all times.

He needed me to throw my previous expectations out the window.

How Much Nurture He Can Accept from Me?

So did my son. Until he learned I loved them. From then on, he gagged at the mere mention of the word “tomatoes”. This went on for two years. One day, he told me he would like to eat a meal with the small tomatoes in it. I prepared it and he ate every single bite and even asked for seconds.

So, I decided to cook the meal again a few days later as a special treat. However, I had not stopped to read how he was doing in that moment, and I had failed to recognize how vulnerable he had previously made himself by consuming the dreaded tomatoes.

He wasn’t ready for another dose of loving what Mom loves. He raged.

He needed me to consistently offer him nurture he could accept in doses small enough for him to receive from me. As I later comforted him, I realized he hadn’t yet been ready for his next dose.

What Activities He is Capable of Participating in?

While, like most any child, our son is thrilled at the prospect of riding bikes, playing on a sports team, taking music lessons, or going to a birthday party, for a long time, he wasn’t ready.

I knew he wasn’t ready because he told me, loudly, through his behavior.

He has been home four years. He started playing soccer two years ago and was successful. He takes swimming lessons and is doing very well. He now loves going to birthday parties for very safe family friends.

But, I truly do not believe he would enjoy any of the above if we hadn’t been willing to take a timeout to give him what he needed, and not more.

The truth is, even as a semi-emotionally-healthy-adult, I have difficulty expressing my needs when I feel burdened. My husband knows what I need because of how I’m acting.

Before our son had a foundation to trust us, he was living in a constant state of stress. Even though he is a bright child, in a state of stress, he never could express his needs with his words.

And, in the same way he couldn’t use words to articulate his needs to me, he couldn’t receive my words as communication. He only heard what I communicated through my behavior.

My actions in every interaction had to clearly communicate, “I’m keeping you safe.” The safer he feels, the deeper our relationship grows. He is able to trust me. It all started with me learning how to listen to him.

Today’s guest blogger is “Alex Chase,” (a pseudonym.) She blogs anonymously through her journey as the mother of four sons through both birth and foster care adoption.  Her two adopted sons endured extreme trauma before coming home at four and five-years-old.  They have been home four years, and with the help of multiple wise counselors, the entire complex “Chase” family is experiencing healing as a whole unit.