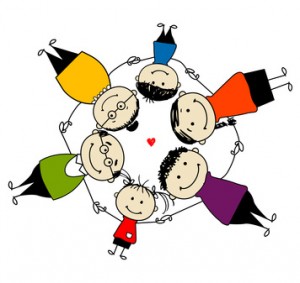 January is named after the god, Janus. Because he possessed two faces, he had the unique ability to simultaneously look both forward and backward. Thus, he was able to maintain a perspective on the past as well as on the future. He is an apt metaphor for our children whose lives are steeped in duality. They began in their families of origin and now are grafted into their adopted familes. Their life becomes a journey of integration and balance.

Because of the losses which are inherent in adoption, our children often find themselves dealing with conflicted feelings. While they appreciate  the positive aspects of their current life, they often simultaneously wrestle with distraction— the baggage that follows trauma. Their eternal vigilance competes with present joy. A segment of their attention concentrates on averting further danger, which leaves  them only partially able to focus on the present.

So how can we help them become more fully committed to the joy of the now? Meditation enhances focus so it becomes an obvious choice—especially one particular style of meditation: laughter. Sound too far fetched for you? The health benefits of laughter have been well documented and it  helps increase focus and calm the body as well as the mind.  Why not try this strategy; you may be delighted with the results.

Use a two pronged approach. First, practice laughter as a family. Make it a regular activity. I remember a laughing game from my childhood. The first person would lay on the floor then each person would lie down with his head on the tummy of the person ahead of him. Got the picture? I suspect you’re already smiling! (In families where physical contact overwhelms a child, modify the game. Lie parallel or in  a circle without touching.) The first person begins the game by saying, “Ha!” Each person repeats it in turn. The game continues with each round increasing the number of times“Ha” is repeated. "Ha ... Ha, ha ... Ha, ha, ha ... etc.)

After the laughter has concluded (1-4 minutes is adequate), lie in silence. Breathe deeply and feel both the body and mind relax. Allow time for the laughter to subside totally--without reprimanding, etc.)

Next week, we will explore how laughter can be used to restore calm in another way. When will your family try the laughing game?