Mother Love Is So Much More Than A Single Day 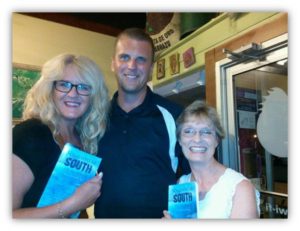 Since September, I have had the privilege to be in relationship with my thirty-year–old son’s birth mother. (Earlier this year she shared her thoughts on their reunion in this blog post.) I’ve discovered many things during the past eight months. The greatest gift of this new relationship is the healing that it has brought my son and his birth mom.

He’s expressed this in many ways: “It’s like a hole in my heart that I never allowed myself to acknowledge has finally been filled;” and “The first time I heard her voice, it sounded/felt so familiar;” and “She gets me; ” and “I see where so many of my traits and patterns come from!” (He obviously inherited his stature from her as well! I’m the Munchkin standing next to him and his mom.)

When he speaks of his birth mother, he lights up. His affection for her is so deep, resonant and healthy.”  It is a pleasure and an honor to observe. He calls us both Mom because that is the truth. Both of us are his mother. Each of us loves him  profoundly and each of us has put him first in our lives. Each of us has chosen his needs over our own personal desires. It cost his birth mother deeply. Since his adoption occurred before the era of Open Adoption, his placement was “closed.” Neither of us knew how the others' lives were unfolding. Although I had sent periodic letters to her via the agency, she never received them. Grief and concern for her son weighed heavily on her. Was he well? Happy? Safe? While he was growing up, the veil of secrecy that was closed adoption established a wall between her and us; I believe it hurt them both. 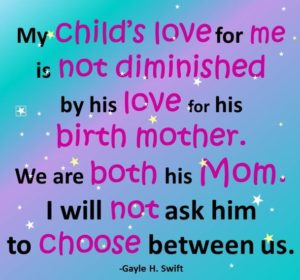 The first time I overheard him calling her Mom, I admit, I felt a pang of insecurity, a tinge of jealousy … The emotion was intense. Fortunately for all of us, the emotion was brief. I knew I could not deny my son the right to acknowledge this important—primal— relationship or to deny its validity. I also knew, in my bones/soul/heart that the connection we’d built during the years we were raising him could not be diminished by his loving her. If anything, my honoring their relationship has ensured our relationship’s health because I have not asked or required him to choose one of us over the other. She and I are both real, and we both love the same child.

I call to mind the wisdom of Solomon when he proposed that a child be divided in two so that each woman claiming to be the baby's mother could have half. The true mother offered to surrender her claim so that her baby might live. She put her child's survival ahead of her yearning to parent.

Earlier today,  I came across this quote from MothersQuotes.com "Mother: Someone who will love you unconditionally, till her last breath." My son has been doubly blessed: he has two moms who love him like that. We are not competitors; we are family.