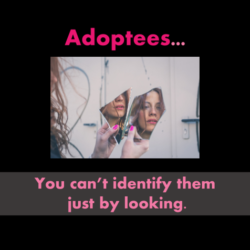 An adult adoptee I know described a recent conversation she had with the eight-year-old daughter of a coworker. Somehow the child learned that my friend was adopted. This shocked the little girl because my friend didn’t “look adopted.” In her child's mind, she assumed that adoptees would exhibit an identifiable appearance that would be instantly recognizable by all observers. At first, the child thought the revelation of my friend’s adoptive status was a joke or a trick. Once reassured that it was neither, the youngster tried to wrestle with her thoughts.

She had questions. The first one began as follows: “So when your real mom got rid of you…”

My friend is a middle-aged adult, well-adjusted, with a life that is proceeding well. She has come to terms with adoption, has reconnected with her birth mother, writes and speaks publicly on adoption complexity. Nonetheless, my friend felt gut-punched by the innocent comment and called me ASAP to help her work through her reaction.

Words spoken so innocently had cut deeply on two main points. The first was “got rid of you.” Intellectually, my friend understood that the child lacked the vocabulary to express her thoughts more tactfully. Viscerally, in the recesses of her own insecurities, the words echoed a deep-seated fear that plagues her—and I think most adoptees— that somehow my friend caused herself to be adopted. A mental laundry list of personal failures that she had compiled during a lifetime of adoption grief, self-recrimination, and doubt immediately came to mind. Her baby self had been “too needy, too plain, cried too much, or wasn’t good enough, etc, etc. etc.…

My friend is familiar with the words of Pulitzer Prize-winning poet Carl Sandburg: “A baby is God’s opinion that the world should go on…” In that conversation with the little girl, however, she didn’t feel like a miracle to be celebrated. The only thought which she could hold was “your real mom had gotten rid of her” like trash. 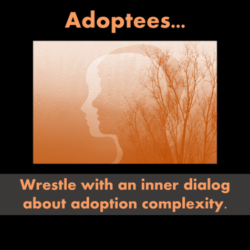 Inside her adult self, a Rejected Child still lived, anguished, ashamed, and convinced she had caused her adoption. She had to be at fault because, in her Inner Child’s eyes, mothers are Good.

A Good Mother would only reject a Bad Baby. My friend recognizes the irrationality of these thoughts and yet…they still burn like battery acid and persist like the belly button that reminds her they were once united.

She has worked hard to develop resiliency, confidence, and competency. Yet this Inner Child awakens easily and for a micro-second she automatically accepts blame, feels at fault, and unworthy in the face of life’s challenges. Intentionality, self-awareness, and a strong commitment to Adoption-attunement has helped her overcome this negativity. Her learning and resiliency have been hard-won.

The second big trigger in this conversation centers on the child’s use of the word real. My friend knew that the child lacked the appropriate language with which to refer to a birth mother. However, because of the unique circumstances of my friend’s life, she dislikes it when anyone suggests that her adoptive mom is not real. (In her mind she experienced mothering only from her adoptive mom. From her first mother, she received only on-going distance and rejection.

As intensely as her Inner Child feels emotions connected to being placed for adoption, she feels equally impassioned about the importance of the parents who loved and raised her and whom she loves and treasures in return. Fortunately, her adult self can hold a medley of emotions and beliefs about adoption complexity. But that requires higher-order thinking and sometimes that more cerebral thinking lags behind the immediate responses of her emotions.

Why did I detail so much of this single conversation? Because it offers a peek into the emotional vortex that lies beneath the observable surface of an adoptee’s daily life. It’s complicated, not always visible, and occasionally understandably reactionary. This is where the skills and empathy of Adoption-attunement help us to be the parents our children need. AQ is helpful from infancy through adulthood. That is why we encourage all our client families to grow a High AQ!

At GIFT Family Services we know and encourage clients who work with us to accept that birth and adoptive parents are all real and are all forever, permanent parts of an adopted person’s whether their presence is physical or only emotional.

Our coaches are available to present workshops in person or online or to speak at your organization or conference. Contact us to explore this possibility.

For additional insight into the adult adoptee experience read “You Don’t Look Adopted” by Anne Heffron. We interviewed her in a past blog. Her book is raw, unvarnished and well worth the read.