Our Young Adult Daughter Returns to Her Birth Family 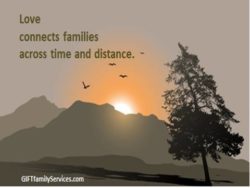 Not long ago, I returned from work to find my soon-to-be 20 year-old daughter frantically washing her clothes. Just that morning, she had called to announce that she was heading back to the birth family and town she left behind eight short years earlier when she became a part of our family.

After about two years of indecision, couch-hopping and wandering, she was finally making good on the promise she had made to us many times before: “I’m heading back to my people, where I belong.” I got so used to this threat that, up to the moment I saw her in our basement shoving that mound of clothes into the washer, I did not believe it. Yet, there she was, finally on the verge of fulfilling the longing that has stayed with her all these years.

And so, if you can picture this, I went up to my dear daughter of eight years and gave her a hug. Then I began to sob, so much that I surprised even myself. As I cried, hugging her stiff body that was not reciprocating, I whispered into her ear, “Just let me hold you here for a while.” I had spent so many days, months, years holding back all the pain I felt on her behalf and all the emotions I had surrounding her. Now it was all spilling out – pain, yes, but also sadness and anger. Did all the love I poured out to her make any difference at all? Was this the “result” of my efforts? Didn’t she know how much we actively loved her and sought to provide a safe, happy, nurturing environment? It was quite a ball of emotions packed into those tears of mine. In addition, quite honestly, those tears were tears of exhaustion. Knowing that she would be leaving somehow allowed me to acknowledge how tired I was. It takes energy to stay strong, focused, and present for a child who is in such turmoil.

What also surprised me was how I moved rather quickly beyond those feelings and through my fatigue. Perhaps it’s partly because, as most parents who have adopted older children will tell you, our children’s lives are complicated, and we know that. Their emotions are complicated. Their desires are confusing. Their search for healing and wholeness can take unexpected turns that may leave us wondering how our children will survive their search. And so, our heart can’t help but go out them, even in the midst of our own feelings of anger or sadness, and grief.

As she was organizing her suitcase, my motherly, protective instincts kicked in again. I was direct in saying that she will want to prepare herself for her own emotions when she returns to her birth family. It will not be easy, I told her, to enter into the family that was unable to care for her the first eleven years of her life.

For many reasons, some of which I will never know, my daughter needed to go back. It is a necessary stop along her journey. Our family is left with the remnants of her time with us: pictures, memories, items left behind. It’s unclear to us the place we now will hold in her life – and that leaves us feeling vulnerable and scared.

And so, in the few hours we had left, we fussed over our daughter, just as we would fuss over any child ready to leave the nest. We helped her finish packing. We slipped little notes into her clothing for her to find periodically: “How is it going?” “Are you enjoying reconnecting?” “We love you!” We even found a favorite poem of hers and added it with a note from us.

Then, we drove her to the bus station – all of us- in a ceremonial way. My husband and younger daughter helped her carry her bags while I stood by her side in the ticket line. While we waited for the bus, we made arrangements for when – not if- she would call us to tell us she had gotten there safely. And then, when she moved toward the bus, we gave big kisses, hugs, and waves of good-bye.

At this time, we have heard from our daughter only three times, the last two initiated by us. She sounds like she’s doing okay. At least she gives us a “’Love you” at the end of the calls, which tells us that our delicate connection is hanging on.

Now it’s time for us to take the long view, which many of us adoptive parents learn to do. The length of our daughter’s journey is unknown, including what our place will be in her life. We hold onto the belief that for eight years, at least, we were a family she called home. Now, we are a family that someday she may come home to. It’s hard to know when or if that day will come.

In the meantime, we as her parents, are choosing to hold our daughter as capable, competent, and strong and will continue to model parents who will “be there” for her on her journey, come what may.